The great thing about being a rapidly aging Baby Boomer is that according to the statistics I am loaded with more money than I know what to do with and I intend spending it all before I die, leaving absolutely nothing for the next generation.
Each morning I wake up I turn on my computer, logon to my bank, and eagerly peruse my account details looking to see if the money has turned up.
It hasn't.
It won't.
And the reason is, of course, that statistics are averages and averages are distorted by extremes.
This brings me to my life, which has had both, extremes and averages.
It all began way back in the late 1940s when Stan and Betty Doust of Bridgetown (Western Australia) decided to get married and produce children.
The first one arrived as the Second World War ended and the next, me, arrived in the same year as the birth of the state of Israel, 1948.
Who would have thought that the feisty, wiry little freckle would find himself in Israel, get married, divorced, and marry again, all to partners he met in that tiny state?
Certainly not his parents, who were both shocked and horrified at the turn of events.
They were hoping their second son would join a bank, learn as much as he could about the world of finance, then go home and help build the family retail empire.
Well, he did, but not quite like that.
He failed school, joined a bank, got the sack, arrived home very tired and emotional, made a good go of it, then left to grow long hair, a beard, and to follow a trail that crisscrossed the globe and involved speaking very slowly, giggling at random and dreaming of an impossible world.
And then, in an exhausted state, he arrived in Israel to experience the truth of socialism in a kibbutz setting, to work in the fields, to love and be loved and to find his soul.
For those of you not as old as those of us who are, a kibbutz was once a communal farm where people worked according to their abilities and took from the collective according to their requirements.
These days it still has a collective heart, but each community, from the outside, looks just like any other capitalist unit fighting for survival in a global economy.
This, surprisingly, brings me back to my local community, Kalamunda (in the humps, or hills, just east of Perth, West Australia) for if I learnt one thing during my three years on a kibbutz, it was that it had much in common with community life in Australia.
Healthy communities thrive on volunteer labour and their unhealthy cousins decline for the lack of it.
Without the enthusiasts who inhabit our shire, who regularly give according to their abilities, for no financial reward, there would be no Kalamunda Community Matters, no Zig Zag Festival and no Meals on Wheels.
And where would we be then?
Vive la communaute!

(The above was printed in a Kalamunda newspaper - Kalamunda Community Matters - a newspaper written and produced by young folk, folk much younger than the writer of this blog. They asked him to write something because they felt sorry for him as he sat alone on a park bench reminiscing about a life that wasn't his.)
Posted by Jon Doust at 11/07/2006 09:41:00 am No comments:

Global warming? Not sure what to do? 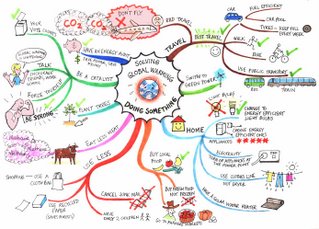 The Stern Review, the report commissioned by the British, Blair, Labor Government, has forecast "global suffering greater than two world wars and one depression if nothing is done to cut emissions". [Weekend Inquirer, The Weekend Australian, November 4-5, 2006]
Unbelievable, that that the greatest threat to the planet is not war, but peace and prosperity!
The more peace we have, the more we produce; the longer the peace, the more we want; the more we want, the more we consume; the more we consume, the greater, the faster the madder the lemming-like spiralling growth; and the more we grow, the more we, well, you get the picture and so on and on until it all ends.

Ok, what to do: A Mind Map to remind us
The above mind map was created by Jane Genovese and her mother, Sharon.
Jane is a student and professional speaker.
And she lives what she speaks.
You can check out the map in all its glory, and other maps by the dedicated mappers, by heading for Jane' s website:
http://www.learningfundamentals.com.au/
And clicking on "resources".
For a full reading of the Stern Review, go ahead:
http://www.hm-treasury.gov.uk/independent_reviews/stern_review_economics_climate_change/sternreview_index.cfm
Posted by Jon Doust at 11/05/2006 05:17:00 pm No comments: