I was looking forward to Armenia, expecting it to be dramatically different to Iran and it was.

Our bus climbed hills and mountains and eventually stopped so we could to admire the view towards snow-caps and lush green valleys. It was cold and those of us who had bought heavy woollen Azeri hats in the rock village of Kandovan, Iran, pulled them low over our heads and grinned at those wearing caps and thin beanies. 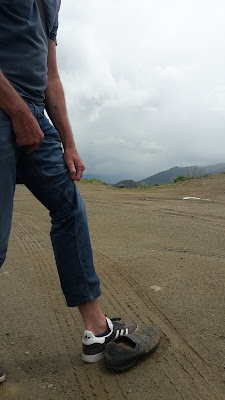 Soon enough we dropped down and wound around a village of houses, stopped in an alley, then walked to house on a rise. We were welcomed at the front gate by the woman of the house and ushered into her back garden. 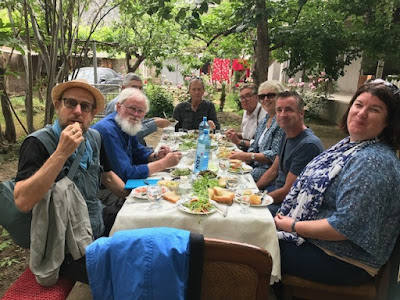 The food arrived in the hands of the lady, her mother, cousins, an entire family. They were busy and there was no time for interaction, but before we left out came the grandchild who smiled and played us like a seasoned greater of strangers.

It was a fine welcome to Armenia.

Our first night we slept in Goris, in a boutique hotel built by a son of the town who had returned home wealthy and wanting to build someone of value for the region. He succeeded.

The town provided a startling contrast - down the street, across the road, everywhere I walked early the next morning, was miserable. I said good morning to everyone I passed. I waved at every car that moved. No one person responded.

On the streets were holes, scattered debris, even a dead dog. 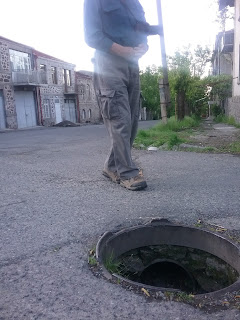 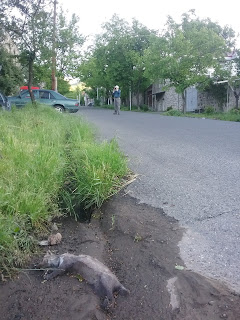 A surprise was in store, however, when one of the party told me of a bakery up the road. I walked into a hive of activity - six women hard at work preparing doe, rolling it flat, then slapping them on the sides of two pits rising above a roaring fire. They held all the joy and happiness of the entire town and threw it at everyone who entered. The bread was nice too.

Here's a piece I just read:

"The Muscovite admired the way the old woman flattened the dough in the air, not against a board but up in the air. She threw sheets of dough into the air and caught them in her outstretched hands, her fingers spread apart. The force of its own weight gradually made the dough thinner and thinner, turning it into a large fine sheet. The Muscovite admired the old woman’s flowing movements, which were both careful and confident; they seemed like a beautiful ancient dance. And the dance truly was very old, as old as the first baked lavash. And the shaggy seventy-year-old woman in her torn quilted jacket sensed the admiration of the grey-haired, bespectacled Muscovite. This pleased her, and it made her feel both merry and melancholy."