WHAT A GREAT IDEA

A suspected Urban Sock Bomber has made application for the notorious Esplanade Hotel Site Sock Fence to be listed by the Heritage Council of Western Australia.
If listed, the developers will be unable to build on the site due to the listing.
It is not known weather the Heritage Minister Mr John Castrilli will take an active interest in the application, or, in deed if he has ever heard of the Esplanade Hotel Site Sock Fence. 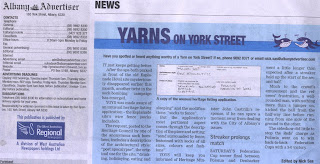 THE FIGHT IS NOT OVER

ELEANOR HALL: Australian apple growers are warning today that if the World Trade Organisation has overturned a ban on importing New Zealand apples it could crush the local industry.

Media reports that the WTO will lift the 90 year ban are yet to be confirmed.

But apple growers are already warning about biosecurity and there also questions about whether the ruling could pose a broader threat to Australia's strict quarantine regime.