While in Iran I made notes, on paper, in a journal and on my phone.

Here are some of them, starting with this one in Shiraz: Today I saw a handsome woman storm across a busy street, child in hand. She was full of fashion, feist, and control. Both men and other women fighting for a place on the road, driving in all directions, gave way to her and the kid and seemed diminished by her presence. It was majestic.

This was even more startling because on my first day, around 6.30am, as I walked down a Shiraz double-lane, island in the middle, street, two women said “Hello”.

Obviously my accent was too good and I heard one say to the other: “Is he Iranian?” I laughed, they laughed, I stepped across the first bit of road on to the island, then, failing to look to the right for vehicles on the next bit, I stepped again and a car missed me by about eight centimetres. Nearly took my head.

Here’s a photo of one of the waiters in our Shiraz hotel. She, along with her co-worker, was funny, cheeky, and she walked with a flowing, athletic walk that I will never forget. 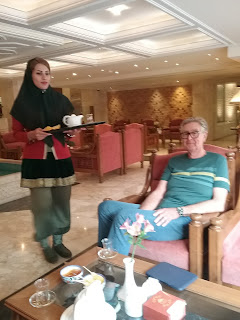 Because of them, their egging, okay, and my desire and willingness, I danced on night three to an Iranian band and almost convinced a table of women to join me.

“Come on then,” I replied. But they didn’t, but they did, in their chairs, at their table, laughing.
Just three days in and I knew Iran was going to be all and more than I expected. 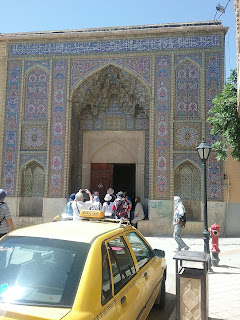 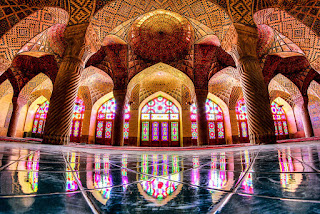 The fabulous Pink Mosque, built in the late 1800s during the Qajar dynasty. Architects were Mohammad Hasan-e-Memār, an Iranian architect, and Mohammad Rezā Kāshi-Sāz-e-Širāzi.

While in the centre square, a number of school boys approached. They wanted to know where we were from. One of them kept repeating: “Shiraz is no good.” I soon learnt why – He was from Isfahan.

On our way out, more boys. They taught me their version of “Long live Iran”: Zen neg e ziot. We yelled it with our arms raised. They loved it. They are joyful, exuberant, eager. Later, I learnt the phrase was not quite right and I stopped using it and found others to take its place.

Here is a column I wrote for the Albany Advertiser and it first appeared on June 15, 2017.

I had an idea of what to expect when I got off the plane in Shiraz, Iran, but not the consistency, or the volume.

Airport security was easy and the customs chap smiled at me when I lifted my leg over the rope barrier. It was a good start and only improved when I met our tour guide, Siavash, Mofidi, Iran’s most recognisable tv star, but we didn’t know it then. Not only was he famous, he was well connected, being an ex-Revolutionary Guard.

But I have got ahead of myself, because the goodwill and generosity started on the plane. Even before I had dropped into my seat, the two women – one in front and one alongside - both wearing hijabs, were smiling and offering assistance.

And once we had landed it was relentless, the offering, the smiling, the welcoming. I felt I had come home and in a way I had.

About fifteen years ago I signed up for a National Geographic project to DNA map the planet. The list of markers, each marker representing a mutation in an individual who would continue the line of my father, placed my Y chromosome trail firmly in Iran, Armenia, Georgia and Azerbaijan.

There’s more, because the name Doust looks like it might be Persian. There are people named Doust, or Dost and in Farsi it means friend. Which is what the vast majority of Iranians we met wanted, to be friends.

Wherever we went, Persepolis, the tomb of Cyrus the Great, Yazd, Tehran, Tabriz, young, old, in hijab, loose scarfs, jeans, they approached with respectful confidence to chat, ask where we were from. And, inevitably, to have their photos taken with us.

When we said we were from Australia, without exception they responded: “Australia is good.” Three even mentioned Julie Bishop and said they were pleased with her visit and the respect she showed.

Hanging out with Iran’s most famous TV star was going to result in unusual incidents and it did, including this writer appearing twice on Iranian TV as a spokesperson for all tourists visiting the nation.

We were in Tabriz when the election results were announced and the joy and celebration was glorious, lots of flag waving, horns blaring, singing and dancing in town squares and no agro. Not a sign.

When, soon after, Trump visited Saudi Arabia without exception, our entire tour party groaned, swore and a couple of us cried.

MORE
Before I embarked on my ancestral and cultural pilgrimage, I read extensively, in particular a book written by an American, Stephen Kinzer, author, journalist and academic – “The Brothers”.

This is a biography of the Dulles brothers, John Foster (secretary of state for Dwight Eisenhower) and Allen (CIA director for same administration). In it Kinzer examines the plot by both the CIA and the Britain’s MI5 to toss out the democratically elected president of Iran, Mohammad Mosaddegh.

As if it all started there, here’s a quote from another of his books, "All the Shah's Men: An American Coup and the Roots of Middle East Terror".

"In 1907 Britain and Russia signed a treaty dividing Iran between them. Britain assumed control of southern provinces, while Russia took the north. A strip between the two zones was declared neutral, meaning that Iranians could rule there as long as they did not act against the interests of their powerful guests. Iran was not consulted but was simply informed of this arrangement after the treaty was signed in St. Petersburg. What had long been informal foreign control of Iran now became an explicit partition, backed by the presence of Russian and British troops. When the treaty formalizing it came before the British Parliament for ratification, one of the few dissenting members lamented that it left Iran “lying between life and death, parceled out, almost dismembered, helpless and friendless at our feet.”


Britain once controlled the entire tobacco and oil industry of Iran and we might wonder why they resist investment by McDonalds and other Western abominations. It is a testament to the resilience of so many Iranians, that for all the evils foisted on them, they have retained their cultural sense of inclusion, hospitality, welcoming and sense of humour.

I submit the following photographs as evidence. 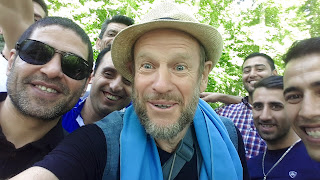 Some chaps I met. 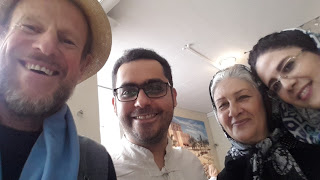 A fabulous family I met in a museum. He, a sociologist (teaching English "There are no jobs for sociologists in Iran"); she, an art historian; and her mother, a housewife, with animated, cheeky, intelligent eyes. 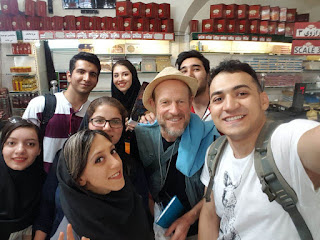 These young folk were architectural students from Tehran, having a ball in Iran's most famous biscuit shop. In Yazd. 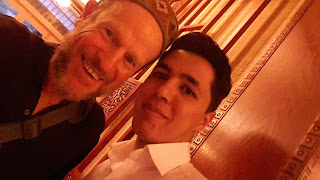 Waiter in a Chinese restaurant - funny, smart and brave. 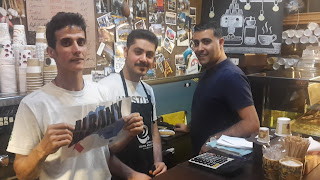 Three dudes running their own tiny coffee chop. Isfahan, I think.
Which, you should know, "Is half the world." 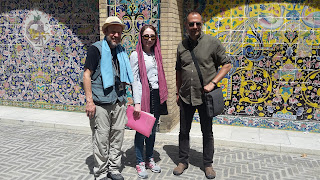 In Tabriz with Mahsa, a chemical engineer and Iran's most famous TV star, Siyavash Mofidi. 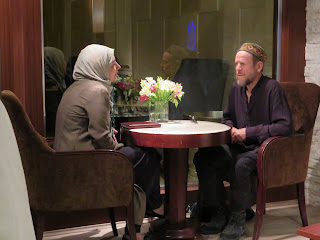 Alla, from Syria, now a journalist in Tehran, interviewing me for a tv show I'll never see. Another show, for local tv in Shiraz.