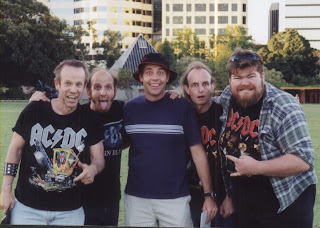 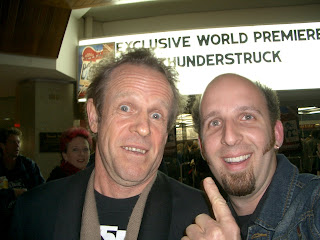 Tonight, on Ch7 and GWN, Thunderstruck, the movie.
Above are photos taken on set.
If you are in tonight, nothing to do, watch it.
If you look closely, you will see this blogger, and some of his friends.
Not sure it's him?
Wait for the credits, therein lies proof.
Posted by Jon Doust at 12/20/2008 01:26:00 pm No comments:

The first time I saw Geoff Kelso perform I noticed something. The venue was a Melbourne comedy room called The Banana Lounge.
About a year later, I saw him in a small room in Perth. He was in a small troupe featuring a couple of tall performers, one of whom was Damien O'Doherty and another was Dave Warner.
I approached him and said: "You like Spike Milligan, don't you?"
He said: "Does it show?"
Well it did. And it still does.
It is almost over, so if you haven't seen it, do so, now.
Ying Tong, a walk with the Goons.
It's not a stack of Goon show scripts performed by wonderful comic actors, it's a play, and Geoff Kelso is Spike Milligan, in all his tortured glory.
Others alongside Geoff are the brilliant Jonathan Biggins, the excellent David James, and the finest John Hannan.
Ying Tong is sad, funny, hilarious, brilliant, emotional, uplifting, inspiring, and worth it's admission price.
It was written by a British stand-up comic and playwrite, Roy Smiles. He might have had Geoff Kelson in mind when he wrote it.
Ying Tong is a Black Swan Theatre production and is on at His Majesty's, the perfect venue.
Check it out here: Black Swan
Posted by Jon Doust at 12/08/2008 05:25:00 am 1 comment:

The time has come the walrus said

Since I have moved into the great southern corner of the vast continent called Australia, my life has changed much.
I only buy papers about three times a week. The TV has almost died completely. I have much more time on my hands.
It is time, I thought, to work a WordPress blog. And that is what I have done.
Why?
Good question.
The experts tell me it is the way to go, so I have gone.
Here it is:
http://jondoust.net/
Go take a look.
A lot of the crap on this blog is now crap over there, but it's also got new crap.
I like this blogspot. I will keep it.
Posted by Jon Doust at 12/02/2008 05:04:00 pm 6 comments: