This was the first of my new columns, published once a fortnight on a Tuesday in the Albany Advertiser, Western Australia. It had to happen, bound to happen, because I like writing a column. But once a fortnight? Yes, this gives me time to finish a book, to surf, run, drink tea with friends and make a living. Oh, by the way, I have started another blog, just about socks, and all forms of public art protest. You can follow it here SOCK IT!
And now, the new column:
An election? Oh, no, not again.
Didn’t we just elect a bunch that were going to fix all the problems created by the last mob who said they had fixed all those created by the previous mob but there were a couple left over and we’d better elect them again because the others might really stuff them up, instead of just muck them up?
My Dad once came back from Mexico with a smile on his face. He said: “I met this tourist guide in Mexico City who had the perfect political solution. He said whenever they elected a decent politician, the first thing they did was shoot him.”
Dad thought that was the funniest thing he had ever heard.
Now, I don’t want you to think my Dad was some kind of hippy revolutionary, far from it. He was a solid citizen, businessman, farmer, Rotary Paul Harris Fellow and chairman of the Bridgetown Hospital Board when hospitals were run by sensible, normal people who could remember when they had their tonsils removed.
Stan, the man, my Dad, would not have liked Kevin Rudd. He would have wondered what the hell he was talking about every time he opened his mouth.
He would have thought Tony Abbott was internally conflicted, stood too close to you when he talked and needed to cut his “arrr” output by about 97%.
As for Julia Gillard, well, I’m pretty sure Stan would have been excited by the prospect of a female leader but he would have been concerned about her naked ambition. And he might have made comments that some would have found offensive.
He was, for many years, a member of the Liberal Party, but he never left a gathering without stirring the pot by making fun of something, or someone, Liberal.
He was, in short, a normal Australian bloke with a larrikin sense of humour.
I remember saying to him once, after listening to him complain about the government of the day, which happened to be Liberal: “Hey, you voted for them.’
Quick as a flash, he replied: “No I didn’t.”
Which surprised the hell out of me.
“Who did you vote for?” I asked.
He never told me and went to his grave without telling a soul.
Because, you see, he belonged to that generation that firmly believed you should never discuss politics, sex, or religion. The first fascinated him, the second he thoroughly enjoyed and the third left him asleep in a back pew.
Whenever there is an election in the offing, I always think of Stan. On the first occasion I put my hand up, for no particular reason other than to fill in the time I had available, Stan loved every minute of my madness.
He even admitted to voting for me. The silly old bugger knew I didn’t have a hope in hell but that was the year Paul Keating went up against John Hewson.
Stan reckoned Keating had a touch of megalomania and that Hewson would have been better off if he’d sent his wife out ahead of him.
Throughout this election campaign I will be calling on Stan’s humour, sarcasm and disbelief. If you stay with me, we might just make it through.
Posted by Jon Doust at 7/28/2010 07:07:00 am No comments:

This will make you laugh 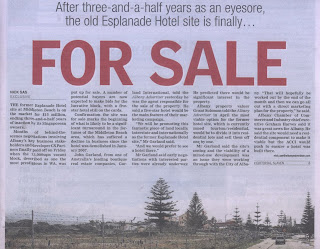