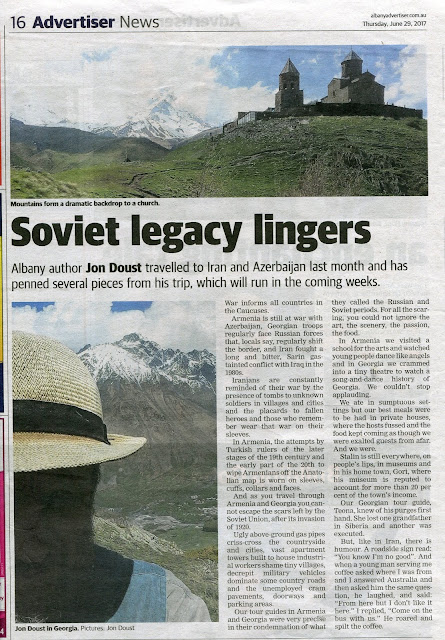 This tale first appeared in the Albany Advertiser.

Here is the copy, for the hard of reading.


War informs all countries in the Caucuses.

Armenia is still at war with Azerbaijan, Georgian troops regularly face Russian forces that, locals say, regularly shift the border, and Iran fought a long and bitter, sarin gas tainted conflict with Iraq in the 1980s.

Iranians are constantly reminded of their war by the presence of tombs to unknown soldiers in villages and cities and the placards to fallen heroes and those who remember wear that war on their sleeves.

In Armenia, the attempts by Turkish rulers of the later stages of the nineteenth century and the early part of the twentieth to wipe Armenians off the Anatolian map is worn on sleeves, cuffs, collars and faces.

And as you travel through Armenia and Georgia you cannot escape the scars left by the Soviet Union, following its invasion of 1920.

Our tour guides in Armenia and Georgia were very precise in their condemnation of what they called the Russian and Soviet periods.

For all the scaring, you could not ignore the art, the scenery, the passion, the food.
In Armenia we visited an school for the arts and watched young people dance like angels and in Georgia we crammed into a tiny theatre to watch a song and dance history of Georgia. We couldn’t stop applauding.

We ate in sumptuous settings, but our best meals we to be had in private houses, where the hosts fussed and the food kept coming as though we were exalted guests from afar. And we were.
Stalin is still everywhere, on people’s lips, in museums and in his home town, Gori, where his museum is reputed to account for over twenty percent of the town’s income.

Our Georgian tour guide, Teona, knew of his purges first hand. She lost one grandfather in Siberia and another was executed.

But, like in Iran, there is humour to be found. A roadside sign read: “You know I’m no good.” And when a young man serving me coffee asked where I was from and I answered Australia and then asked him the same question, he laughed, and said: “From here, but I don’t like it here.” I replied, “Come on the bus with us.” He roared and spilt the coffee.