Like many when away from home I explore, mostly on foot, and reflect on the place I left behind.

On my most recent trip, to research a book and attend a conference, I landed in Barcelona for the first time since 1974.

Way back then I was a raw and idealistic young man, Generalissimo Franco was in charge and the streets were full of his hated henchmen carrying sub-machine guns.

With Spain now a confirmed democracy, I saw it all with new and often dazzled eyes.

So what is it about Barcelona that could be of any interest to us in the great southern and, in particular, Albany? Well, they know how to wait on table, to serve with efficiency and panache and they know how to celebrate great art and architecture.

We are not blessed with a Gaudi, perhaps the 20th Century's most unbelievable architect, but we do have fine architects and maybe it is time to celebrate them and find a way to let the rest of the country know about them. They are mentioned, of course, in the annual building awards, but I'm talking about art, not drafting.

This capital of Catalonia also knows how to use space and as I walked the beach-side promenade I imagined exercise bays on the grassy verge at Middleton and the long stretch between the Boatshed and the Albany Entertainment Centre and more opportunities for activities when the city is full, perhaps popup entertainment and street theatre.

Barcelona streets, alleys and all major thoroughfares are designed for people. Every buildings cluster has it's piazza where residents gather to drink coffee, chat, walk the dog or sit and watch others.

Traffic runs down either side of long promenades, full of people selling, buying, walking and gazing at the passing parade.

In it's centre Barcelona has La Ramblas, running all the way down to the Mediterranean, dotted with all manner of sights and sounds. We could have the Wellington Walk, all the way from the top of York Street to the Boatshed, dotted with whatever people think is interesting and unique about us.

My first time in Barcelona

In 1974 I took a train from Paris to Madrid, then all the way across Spain to Barcelona, with my first wife, an Israeli, she of the hard face and fiery temperament.

Our stay in Barcelona was blighted by her insistence on taking ill and moping about as though she might collapse in a heap and embarrass her dysfunctional and newly won husband.

Back then the city was in the grip of the Falangists, Franco's men with funny hats and sub machine guns, ready to shoot communists on sight and storm into late night bars and order drinks on El Presidente’s orders. We were nervous, she a hardened communist from a kibbutz and me an ardent convert.

Franco didn't last much longer and neither did the marriage.

Not long after we left Spain we arrived in Bridgetown (WA), she for the first time and me after a long time. We picked apples and she called my people names. One weekend we drove to Albany, a place she fell in love with as she fell out of love with me.

This time
(With a new placement of tongue)

Picking pockets is clearly a growth industry along the Mediterranean and I think now is the time for Albany to jump in and command the southern hemisphere trade.

I mean, let's face it, West Australian pockets are ripe and bulging and if there's a town ideal for picking, it's Albany.

Over the next two years this place will be crammed tight with tourists and so we should begin now training the young, ready and willing to dig deep in other people's pockets.

Let me make it clear that I would be more than happy to return to Barcelona on behalf of the city to recruit Spain's best Fagan, bring her home, and help set up our own Great Southern International School of Pocket Pickers.

Then we need a major marketing campaign to point out that Australians no longer need to travel so far to experience this exciting phenomenon: a quick trip south and they can leave with empty lockets in well under half the travel time.

Barcelona is best known for it's artists and it's opposition to Franco. Franco is dead, but the art lives on. You go to Barcelona you have to see Picasso, Gaudi and Dali.

And here's what we can do.

We have no Franco although we do have a Colin and some call him Emperor, but he is not an itch on Franco. We do however have art, much of it fine and excellent. And we have a good start with the much sought after Albany Art prize and the Great Southern Arts trail.

The lesson of Gaudi, Picasso and Dali is that we need to make something of our artists, celebrate them to draw attention to the rich artistic vein that runs through the region. Three will attract many to view a lot.

And architecture. What about a building, doesn't have to big, or even grand, just something obvious, but designed and built by one of our own. We have a number of fine young practitioners in town. What about a competition to design a structure that symbolises our spirit. 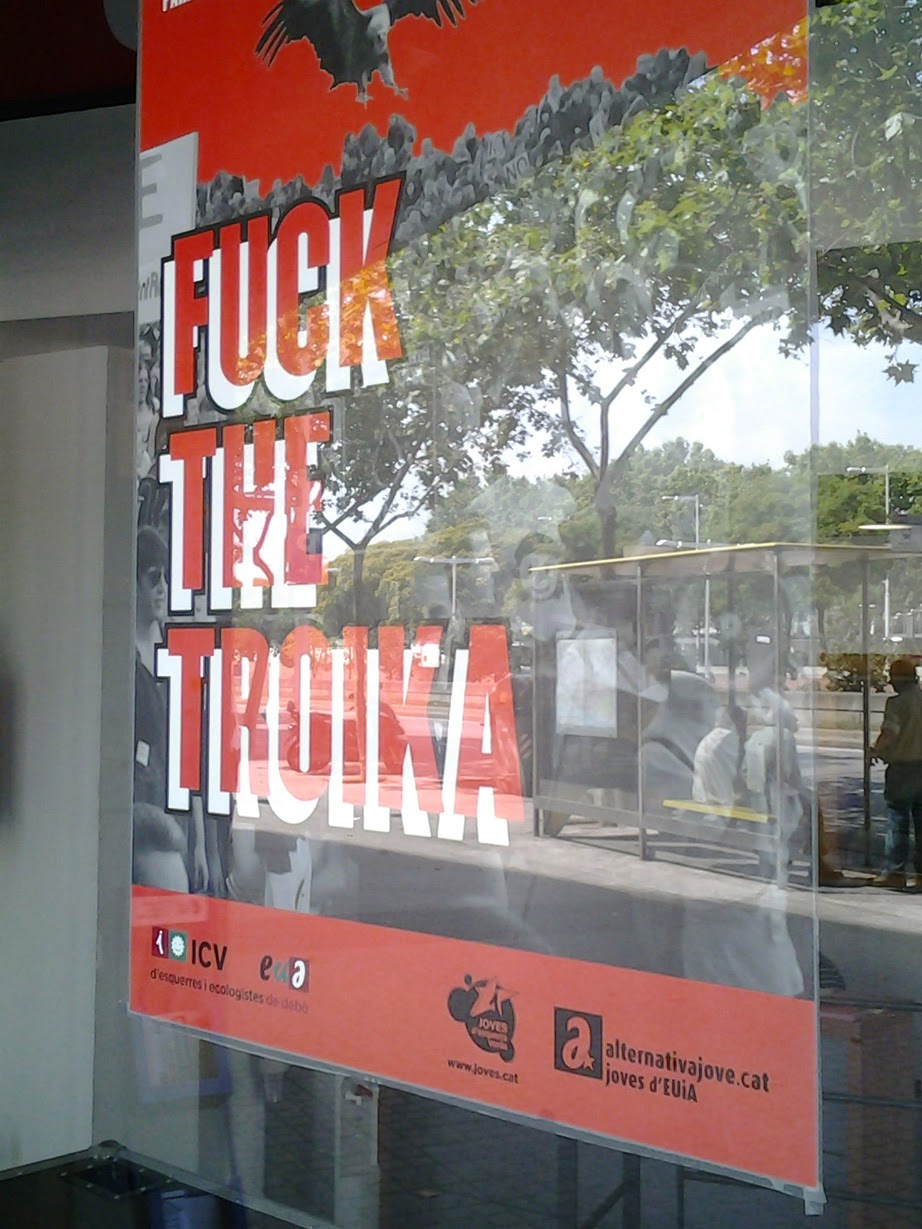 The revolutionary spirit, alive and well in Barcelona. 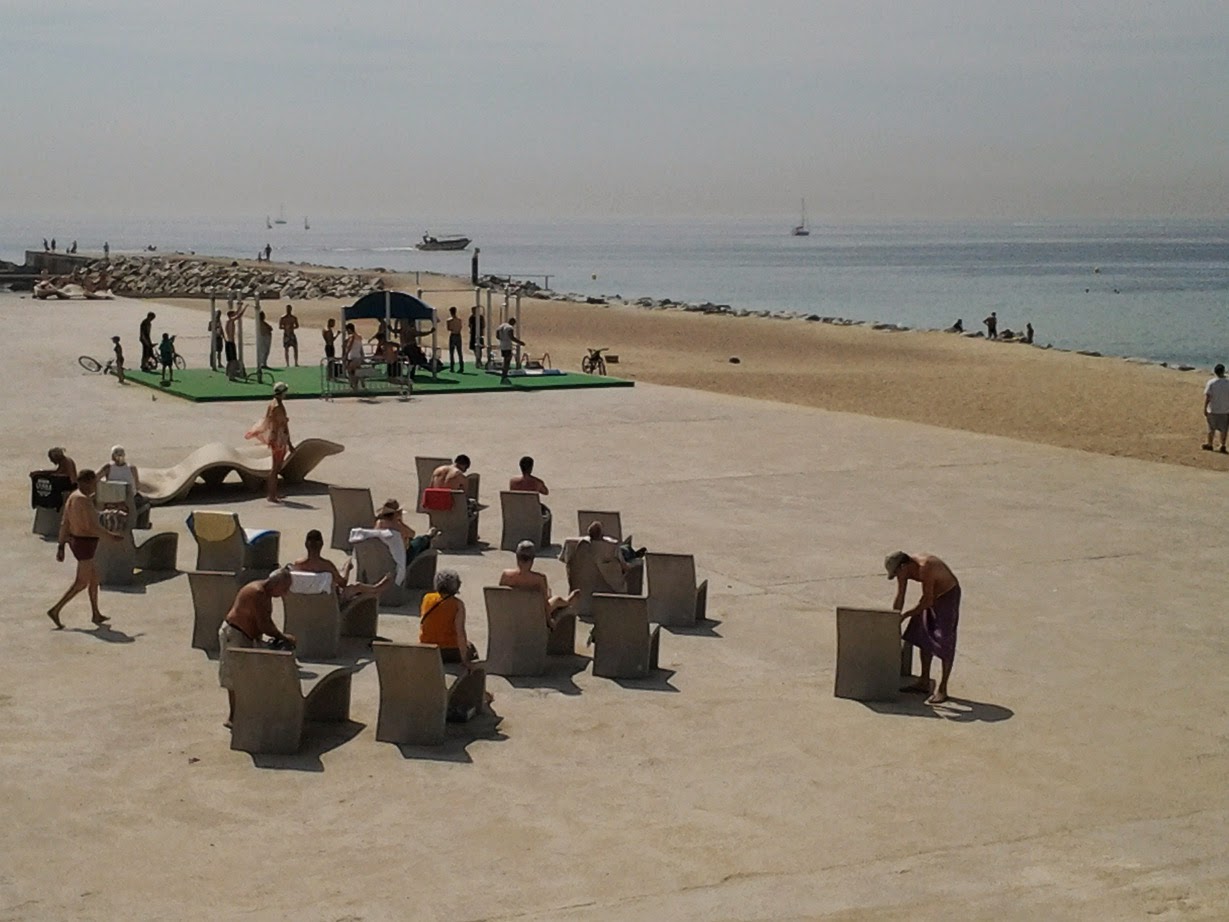 So many people sitting, or working out, so few swimming. 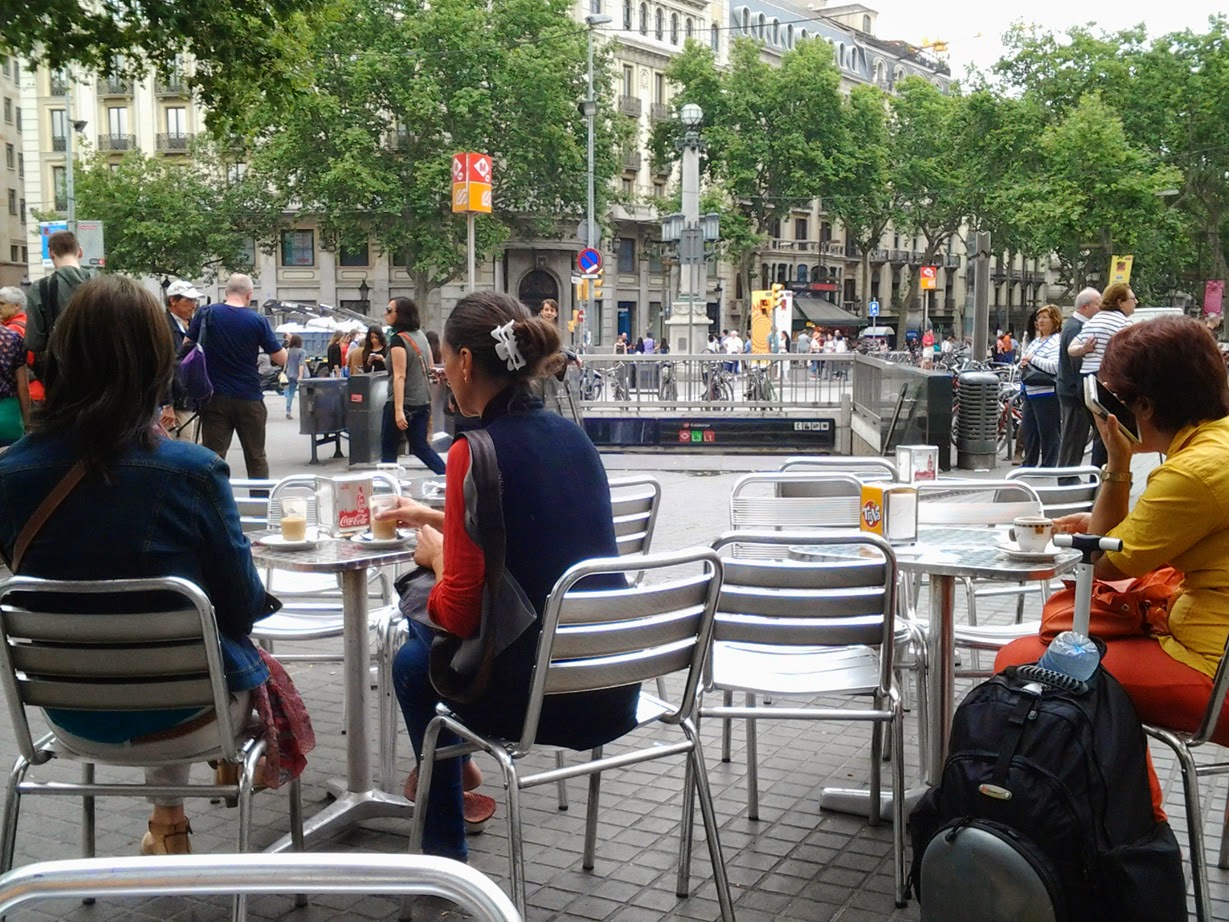 The view across the road to La Rambla, from Cafe Zurich. Here, the waiters don't come out empty handed, they don't return empty handed, and when you order, three minutes max, coffee. It was good coffee too, but not all fast deliveries delivered as good a product. 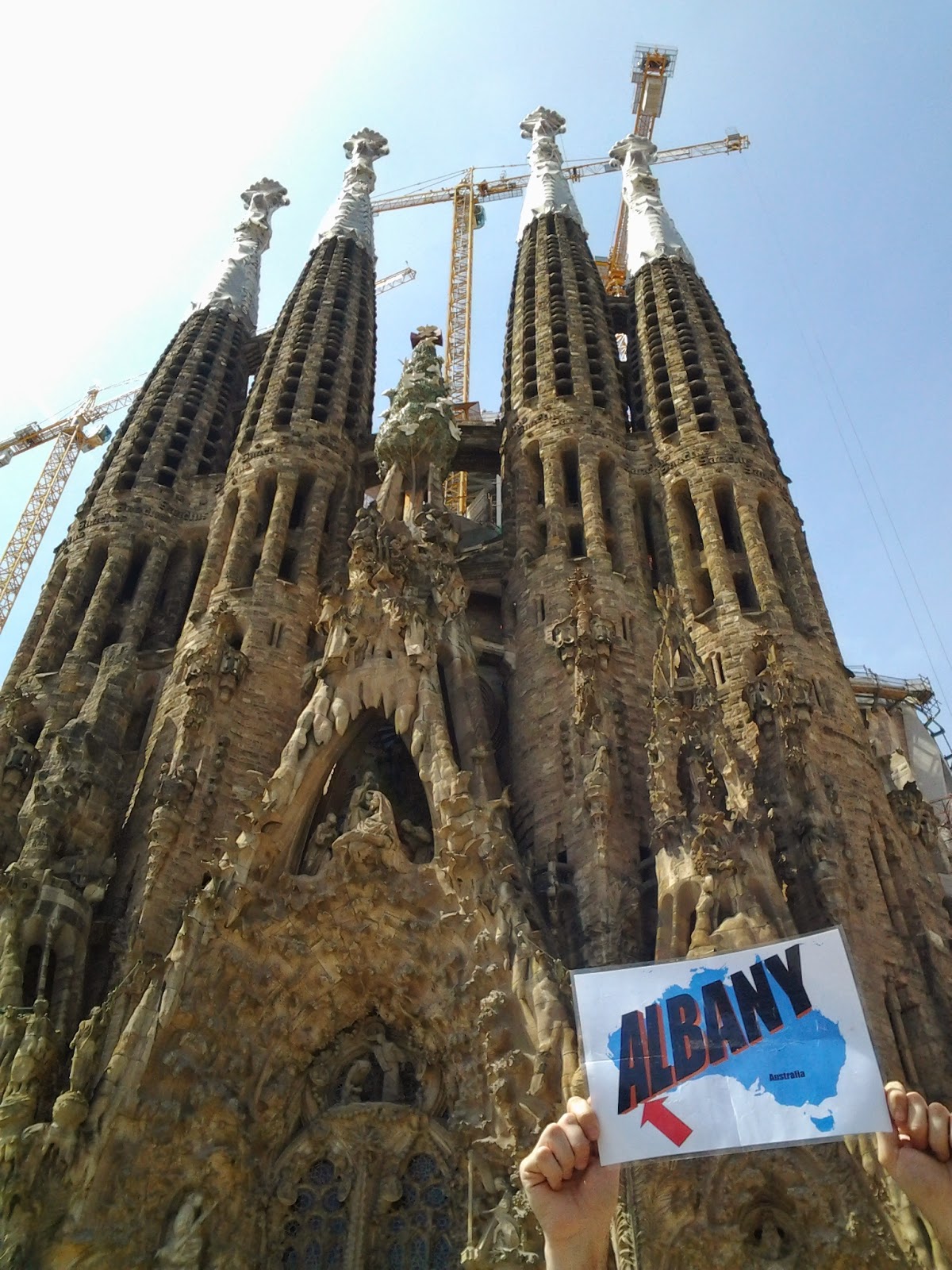 Sagrada Familia, they started in 1927, still building. Wherever I went, Albany always on my mind. 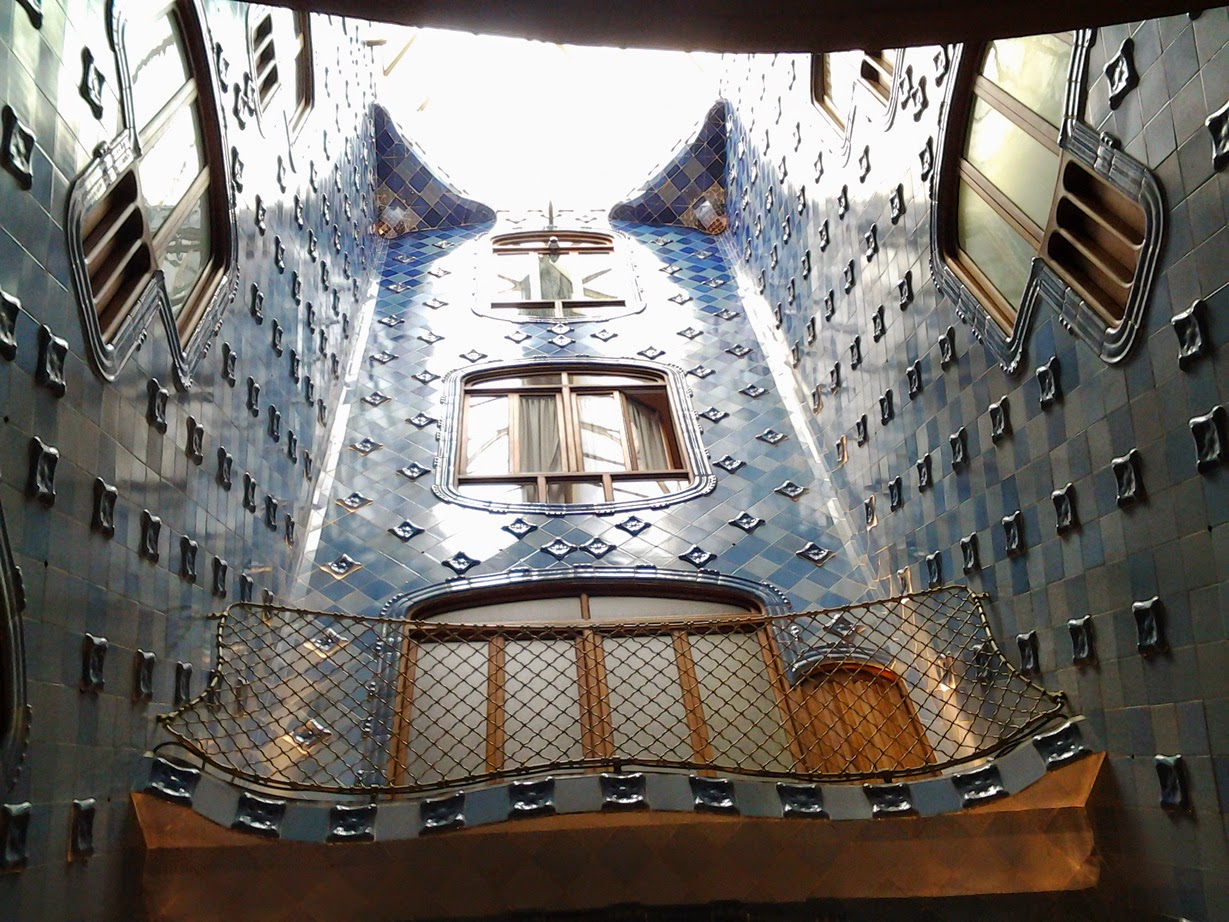 Inside a Gaudi house. Looks cluttered, complicated, yet it is stunningly simple and practical.
Posted by Jon Doust at 8/29/2014 12:04:00 pm No comments: