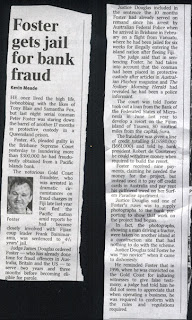 Given the above article I decided to finally run a tale I first wrote for the Saturday edition of the West Australian, Western Australia's only daily newspaper. In its original form it was rejected by The West's lawyers.
The lawyers were concerned that Peter Foster might sue. I think in the original I called him a "fraud".
I rewrote the piece about five times, trying to get it right for the legal brains, but never succeeding.
Here is the version we are left with.

Every so often this column takes a strange turn.

I think it is important to note that the writer is still me, but not quite me, not the full me, the me you have grown to know and love, more a channelled sort of me, from somewhere else within me.

Are you still with me?

Thing is, truth is stranger than fiction and most of us can tell the difference, but every now and then you meet someone who can’t.

Along the way I have met more than my allotted share of these folk and, I must say, for the most part, I enjoyed their company.

Indeed, I lived in Israel for three years and while there I met five men who claimed to be the reincarnated Jesus Christ.

One was a train driver from Arkansas, another a bookkeeper from Wyoming, one was a butcher from Scotland and two were very crazy men who confronted me in Jerusalem and yelled at my face and behaved in a way that led me to believe they were not Jesus after all but people desperate to be somebody. So I gave them both time and a little money.

Along the way, many of us, due to accident, biological distortions, life circumstance, or excessive imbibing of one thing or another, manifest some of the characteristics of people without a good grip on reality.

As someone once said: There is a fine line between sanity and it’s opposite.

And someone else, George Santayana, a Spanish-born American philosopher, added: Sanity is a madness put to good use.

After all those freeform, earlier years, my life has reached another, tamer stage and is heavily influenced by a long-term and stable marriage, fatherhood, regular intakes of fresh fruit, vegetables, especially locally grown garlic, and nothing more intoxicating than air skimmed off the Great Southern Ocean.

What moves the blood a little is body surfing, certain kinds of performing, meeting the occasional psychopath and reading.

My tastes are eclectic. I read anything from Phantom comics to Nobel Prize winning novelists, gritty crime, rampaging adventures, philosophic meanderings and academic works on psychopaths.

Psychopaths fascinate me, always have.

I’m not big on the violent criminal psychopath, the people everybody thinks of when they think of the genre, people like Hannibal Lecter, American Psycho’s Patrick Bateman and WA’s own David Bernie.

They still fascinate me, but I don’t fancy meeting them.

In an earlier column I referred to Peter Foster, not a psychopath, but well known as a con-artist and corporate conman, a man I have never met, although I claimed in one of these columns that he was a family friend.

The corporate conman also fascinates me and recently I almost threw out a sack of newspaper clippings collected since the early 1980s, but curiosity got the better of me and the resultant lingering produced an article from the Sydney Morning Herald of June 1988, all about a much younger, recently bankrupted and much photographed, Foster.

When I say photographed, it’s not really him they want, rather his busty British ex, Samantha, his Gold Coast stripper, Tina, or his whatever from wherever who is inevitably blond, striking and adoring of himself.

But let me get back to psychopaths, who abound, according to Australian Dr John Clarke, psychologist and author of Working with Monsters, How to identify and protect yourself from the workplace psychopath.

Dr Clark describes the corporate criminal psychopaths as having behaviours that “may be criminal and/or sub criminal (ethically and/or morally wrong but technically not illegal) to gain a financial or other advantage for themselves at the expense of other people. This category includes bank employees who defraud their employer, stockbrokers involvd in scams, builders who con clients, real esrtate agents wo dupe homeowners, lawters who spwend their clients trust funds ….”

Given the tameness of my current life I rather like the ability of the mind to take the strange turn and, when writing about people who I think are somehow disconnected from social mores, or psychopathic, rather than mocking them in the traditional, arrogant manner, I prefer to find the disconnection within, the bit that lives inside me, let him out, and see where he takes me.

So next time you read this column and think: Either this bloke’s nuts, or this is complete claptrap.

It has been confirmed.
Today, Saturday December 1, 2007, John Winston Howard is no longer the member for Bennelong, NSW.
He lost his seat, he can't find it, it was taken from him, he was told never to come back that, henceforth, it would be occupied by another.
The new owner of the seat is Maxine McKew, a former ABC journalist, who delighted in squeezing French phrases into interviews with people who seemed to enjoy them, for no apparent reason.
Most people think she will be good in the chair.
There is no doubt she will be better than the man who left it, often, for long periods of time and who now has no claim on it.
John Winston Howard will be remembered as a mean spirited man who walked with a jerk and smiled like one too.
For all that, he did send troops into East Timor when others before him had fainted and he did stand up and hug people when they cried because other people he had sent to Iraq died, or were killed.
And, to be fair, during the period of his Prime Prime Ministership, he did learn to hug, seemed to embrace the hug, almost require the hug and may well have hugged the incoming PM, The Man Who Looks Like a Fish.
Kevin "The Fish" Rudd may say sorry, he may not, he might offer an apology, he might use the word "regret", we don't know, nobody does, but he will decide.
Whatever happens, we must not loose our sense of the ridiculous, this is, after all Australia.
Good luck.
(For those of you not in Australia, it is useful to remember this number: 7.)
Posted by Jon Doust at 12/01/2007 09:32:00 pm 2 comments: